11 Frequency and pitch: How do we know?

By the 1600’s, scientists understood a lot about how the pitch we hear is connected to how the sound source vibrates. Even though sources of sound vibrate quickly- from tens to thousands of vibrations per second- scientists were able to measure frequency well with the help of a centuries old invention.

In the late 1600s, Robert Hooke- the same guy that’s famous for his work on springs- invented a device now called a Savart Wheel. If you’ve ever stuck a playing card in a spinning bike wheel, you understand the basic idea. When you place a card against the edge of a spinning gear, the card vibrates and produces a tone. The faster the wheel spins, the higher the pitch.

The diagram above shows the basic apparatus. The operator turns the hand crank slowly and a series of gears steps up the spin rate. Hooke’s knowledge of gears allowed him to accurately measure how often the gear hit the card based on how fast the operator turned the crank. The apparatus provided the first clear mathematical connection between measurable vibration frequencies and musical pitches.

In the 1830’s, Felix Savart resurrected and refined Hooke’s design to study the limits of human hearing, creating what are probably the first man-made ultrasonic sounds. More recently, musical instrument designer Bart Hopkin created a musical instrument based on the idea.

Around 1799, John Robison used a similar idea to invent a musical siren. When a rotating disk with regularly spaced holes is placed in a stream of air, the air stream is broken up into a series of air puffs (see diagram below): 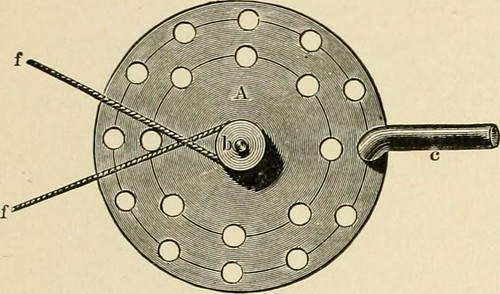 A stream of air from the tube (c) passes through the spinning disk (a) while the hub (b) is driven by a string (f). This 2016 Scientific American article [1] shows a modern design using a cordless drill, a drinking straw and construction paper. If the straw is lined up with a band of holes, you hear a flute-like sound when you blow through the straw. The faster the drill spins- the higher the pitch.

How does it work? Every time the air stream lines up with a hole on the disk, a puff of air is created behind the disk. If the holes on the disk are evenly spaced, the puffs are created at regular time intervals-  a periodic vibration. The rate at which puffs are created is the frequency of the sound. Put another way, if five hundred holes pass the air flow each second, the frequency of the sound is 500 Hz.

Notice that, when you multiply the two fractions on the right hand side of the equation, the result simplifies to “holes per amount of time”- just as it should be, since frequency is how often puffs are created.

Siren disks provide a clear way to connect the frequency of a recurring event (the creation of air puffs) with the human sensation of pitch- the more often air puffs are created, the higher the pitch sounds to the human ear. At a deeper level, siren disks can be used to establish the connection between human perception of musical intervals and frequency ratios. For instance, you can prove that a musical interval of an octave corresponds to a factor of two in frequency using a siren disk.

Identify important physics concept: This question is about siren disks.

List known and unknown quantities (with letter names and units):

Do the algebra: The equation is already solved for frequency. Move on to the next step.

Do unit conversions (if needed) then plug in numbers: Since frequency is usually measured in Hz, the spin rate needs to be converted from rev/min to rev/sec.:

Now, plug in the numbers:

Reflect on the answer:

If you’ve ever drifted off the side of the road and hit a rumble strip, you know the distinctive (pitched) sound made by the grooves on the pavement. Traffic engineers place regularly spaced grooves (or raised bumps) on the center stripe or along the shoulder to alert inattentive drivers to potential hazards.

Like siren disks, rumble strips work by creating a periodic vibration. The rate at which the car encounters the bumps equals the frequency of the sound produced. The frequency of vibration of the wheels (and the pitch that you hear) are controlled by two factors: how fast the car is going and how far apart the bumps/grooves are. The highest frequencies occur when you’re traveling fast over bumps that are close together:

Engineers have even used this idea to create “singing roads.” Make the right pattern of ridges- closely spaced for high notes, far apart for high notes- and a car traveling at constant speed will be able to play a tune. Most singing roads sound pretty bad, but the few that exist attract a cult following.

In the US, rumble strips are usually spaced so that a car going 60 mph hears a 90 Hz sound. What is the center-to-center distance between bumps on such a road?

Identify important physics concept: This question is about rumble strips.

List known and unknown quantities (with letter names and units):

Do the algebra: The equation needs to be solved for bump spacing:

Do unit conversions (if needed) then plug in numbers: Since frequency is usually measured in Hz, the car speed should be expressed per second (not per hour). Since the answer for bump spacing is likely to be much less than a mile, it makes sense to convert the speed to feet per second (so that the bump spacing comes out in feet):

Now, plug in the numbers:

Reflect on the answer:

The math that explains singing roads also explains how air rushing through a corrugated tube can make it “howl” or “sing.” As air rushes through the pipe, it encounters the bumps in the pipe creating eddies that create regular disruptions in the air flow. The frequency of the sound is controlled by the air speed and the spacing between the bumps in the tubing.

Understanding Sound by abbottds is licensed under a Creative Commons Attribution 4.0 International License, except where otherwise noted.